Around 75 percent of the population of the European Union has chosen urban areas as their place to live. The Smart City concept as the next stage in urbanisation has gained ground with policymakers, leading to investment in human and social capital, resource management and new developments in environmental sustainability. Smart Cities can be considered as ecosystems, albeit with a high technical component. This type of urban metabolism is an open and dynamic system that consumes, transforms and releases materials and energy, develops and adapts to changes, and interacts with humans and other ecosystems.

Air pollution harms human health and the environment. Despite the fact that automobile and industrial emissions have decreased in recent years, air pollutant concentrations remain high and air quality problems persist. A significant proportion of Europe’s population lives in areas—notably cities—where air quality standards have exceeded emission limits for several air pollutants: ozone, nitrogen dioxide and particulate matter (PM) pollution pose serious health risks. The danger is local, regional and also international as air pollution emitted in one country may be carried long distances by the atmosphere to other locations, resulting in poor air quality there.

Environmental noise also affects a large number of Europeans and the public perceives it as one of the major environmental problems. It can affect people in both physiological and psychological ways, interfering with basic activities such as sleep, rest, study and communication.

In response to citizen demand and driven by three main aspects of governance, a new concept for cities is taking hold to offer a better quality of life to citizens, minimise environmental impact, and reduce costs. The Parking scenario is one of the most important problems present in a city that involves all three factors.  Throughout the world, atmospheric pollution and congested roads depreciate the quality of life, resulting in lost time for drivers and wasted fuel. The European Commission estimates that economic losses due to traffic delays total €150 billion per year in Europe. The need to search for available parking spaces is a significant contributor to widespread congestion and a major cause of stress for motorists. Based on calculations in Barcelona, Spain, a million drivers spend an average of 20 minutes every day looking for a parking spot, producing 2,400 tonnes of CO2 emissions. 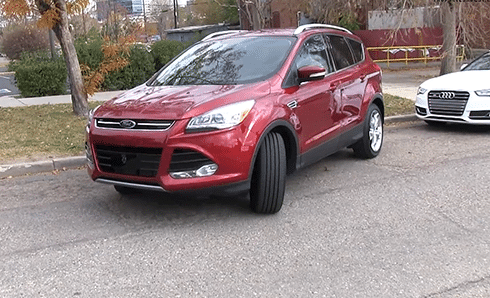 SMART SANTANDER project, which has been developed by several companies and institutions including Telefonica I+D and the University of Cantabria, aims at designing, deploying and validating in Santander and its environment a platform composed of sensors, actuators, cameras and screens to offer useful information to citizens. 1125 Waspmotes have been deployed to monitor different parameters such as noise, temperature, luminosity, CO and free parking slots.

Unique in the world, SmartSantander is really a city-scale experimental research facility in support of typical applications and services for future Smart Cities. This exceptional experimental facility is sufficiently large, open and flexible to enable horizontal and vertical federation with other experimental facilities, and to stimulate the development of new applications by various types of users including experimental advanced research on Internet of Things (IoT) technologies, based on the realistic assessment of users’ acceptability tests. The project envisions the deployment of 20,000 sensors in the European cities of Belgrade, Guildford, Lübeck and Santander (12,000), exploiting a large range of technologies.

Within this article, we will focus on Santander deployment. If you want to know more about Belgrade deployment, please visit this case study. 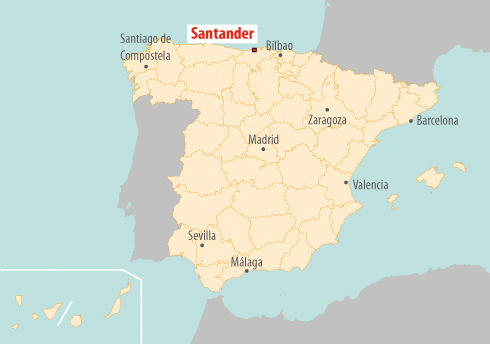 This project can be better explained with the following diagram, showing the nodes, the networks created and their connection to the cloud.

One of the main challenges we encountered during the SmartSantander project was the Over-the-Air-Programming (OTAP) development needed to program all the nodes wirelessly and remotely. Libelium collaborated with the University of Cantabria to improve the OTAP system, creating a more robust network that can be upgraded at any time from any place. 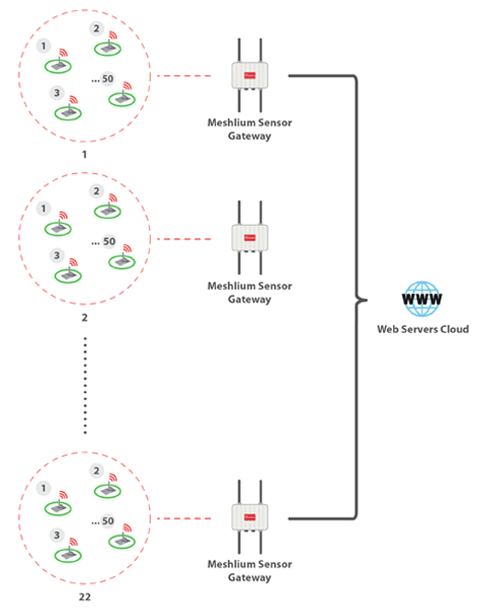 In this project 1,125 Waspmotes were deployed in different locations within the city of Santander, to measure five different parameters:

Each sensor has two radios for communicating at 2.4GHz (except for the parking sensors). On one end of the communication, DigiMesh is the protocol selected to send the environmental information. On the other hand, IEEE 802.15.4 protocol is used to carry out experiments within the network. All the nodes within the SmartSantander network can be used to test new algorithms without any downtime, while citizens still receive information about their environment.

To explain this large project in detail we have written 2 articles more focused on each part:

If any of these five parameters goes above a certain threshold, the system analyses the information and may react by sending an alarm to the central node (the wireless gateway, Meshlium, in this case). To know where a sensor is located, each Waspmote can integrate a global positioning system (GPS) that delivers accurate position and time information. 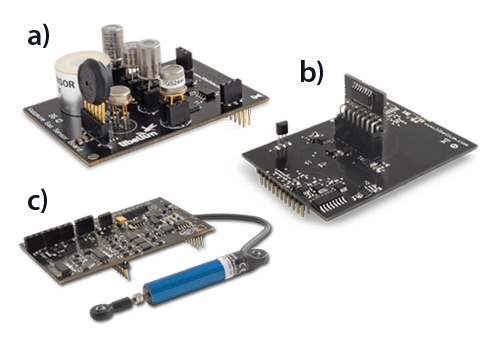 Fig. 4. – Distance reached depending on the protocol

We can reach up 40 km with Line of Sight (LOS) conditions using the 868MHz module. The high performance of Waspmote makes the readings really accurate and the transmission is highly reliable and flexible, placing the nodes at an average separation of 1,5 km.

It is also possible to transmit the data via GPRS/3G, as a secondary radio module for better availability and redundancy in situations when it is critical to ensure that the message is received, as for fire alarms. Because the GPRS/3G module is quad-band it can operate in four different frequency bands and supports any cellular connection provider, making it able to work all over the world. In this way, the project we are describing is suitable for any country.

One of the main characteristics of Waspmote is its low power consumption:

Waspmote is sleeping most of the time, in order to save battery. After some minutes (programmable by the user), Waspmote wakes up, reads from the sensors, implements the wireless communication and goes again to sleep mode.

Deployment of the wireless sensor network was carried out by IDOM and TTI Norte, two Spanish companies specialised in telecommunications and engineering. First, a coverage study was done to know where to place sensors and repeaters to maximise the area covered by the project. The coverage study divided the city into 22 different zones.

Fig. 5. – 1 zone of Santander including Meshlium and its sensor nodes

Each zone had a Meshlium wireless gateway to gather the data from the sensors: the number of sensors depended on the area to cover. The process involved deploying zone by zone, to create independent networks that work on different frequency channels without any interference from one another.

First, the sensors were calibrated to check that their output was accurate. Once they had been calibrated, they were randomly tested to pass Libelium’s quality control. Each node was placed within an IP-65 box that could be deployed under the harsh conditions of the city of Santander. 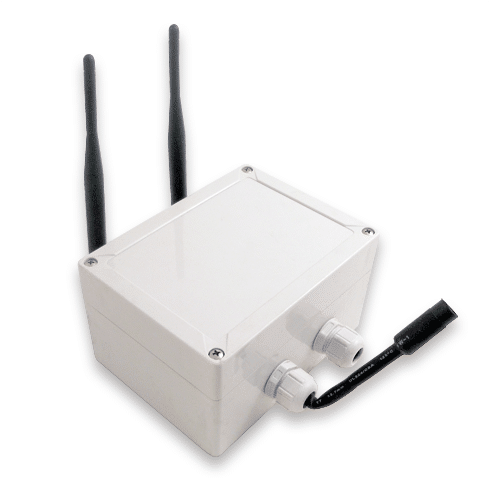 Fig. 6. – SmartSantander box that contains Waspmote with a noise sensor

The sensors were placed on light lamps or building fronts, trying to minimise the visual impact on the city. Each box contains the electrical equipment necessary to be connected to light lamps without any danger to public installations. They are connected to the line through residual current circuit breakers and fuses to avoid electrical problems. A transformer adapts the current and voltage to power the nodes. 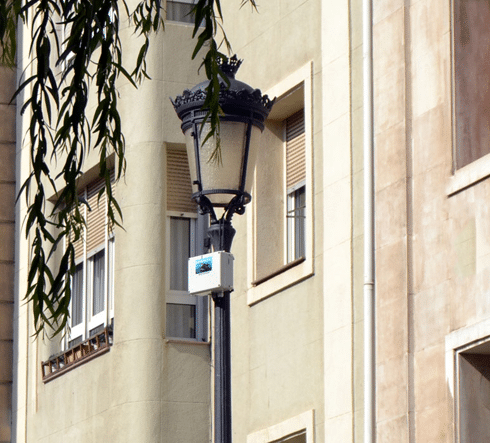 On the other hand, Waspmotes were deployed in different locations within the city of Santander, measuring magnetic field to detect whether a parking slot is free. Magnetic field sensor is connected to Waspmote through the Smart Parking Sensor Board. These sensors detect the variation of the magnetic field generated by a car parked on it. To do that, the sensor is buried under the surface of the road inside a waterproof casing. The hole is closed using a specific material and it is barely detectable at a glance.

Fig. 8. – a) Waspmotes buried under the road surface b) Displays to show free parking spots

Each Meshlium gathers the data from all the sensors within its zone, stores the data in a MySQL database and sends the information to the Internet through a 3G or Ethernet connection. Meshliums are placed on the top of buildings to maximise the area covered.

As a result of this installation, environmental parameters can be monitored for further study and citizens can also know them thanks to real-time maps available for viewing. Furthermore, the SmartSantander project is a large-scale network for experimentation that allows researchers from all over the world to test different algorithms in a real environment. 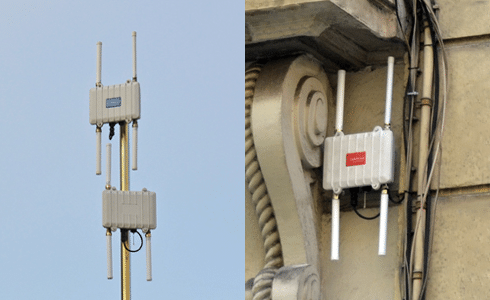